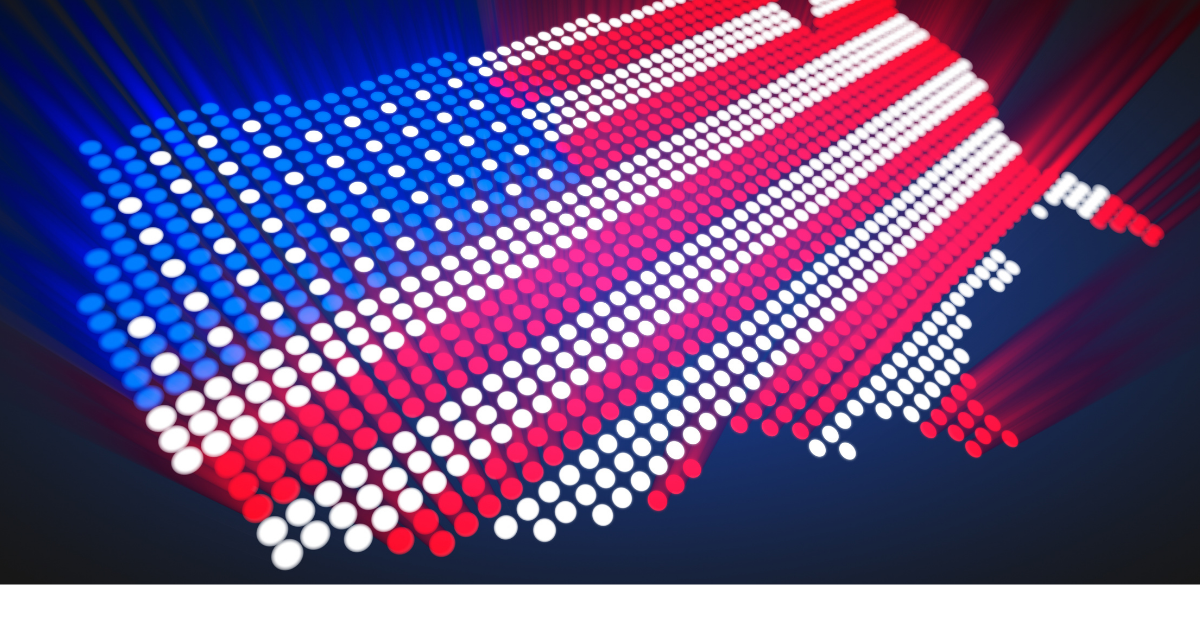 Listed below are political snippets on the presidential and congressional races as well as state turnout figures from across the country. Enjoy!

A Pennsylvania state judge yesterday ruled that Secretary of the Commonwealth Kathy Boockvar (D) lacked the authority to change the post-election ballot reception deadline for ballots lacking proper identification. Approximately 10,000 ballots fall into this category, and they will apparently now be disqualified. This ruling, in and of itself, will not affect former Vice President Joe Biden carrying the state. His unofficial lead sits at 54,325 votes according to the official state count, but other lawsuits remain pending.

Michigan and Wisconsin have been projected for Biden. Arizona could possibly switch from Biden to President Donald Trump, while Nevada should still yield a close Biden win. If Arizona switches and Georgia and North Carolina hold for Trump, the race will then come down to the final count in Pennsylvania.

At the end of the preliminary process, we will likely see a Biden Electoral College victory that the Trump campaign will challenge in court over various legal issues particularly relating to the Pennsylvania and Michigan process, and possibly also Georgia. Because the Wisconsin result fell within the one percentage point victory margin, the votes will be recounted in accordance with state law.

The Senate races are now complete with the exception of the two Georgia runoff elections. Sens. Thom Tillis* (R-NC) and Dan Sullivan* (R-AK) were projected as winners during this week bringing the Senate partisan division to 50R-48D pending the outcome of the two Georgia races scheduled for January 5th.

The Remington Research Group is the first to release data for the January 5th Georgia Senate runoff featuring both of the state’s incumbents. According to the Remington data (11/8-9; 1.450 GA likely voters; interactive voice response system), Sen. David Perdue* (R) holds a 50-46% lead over Democrat Jon Ossoff in the A race, and appointed Sen. Kelly Loeffler* (R) edges Democrat Raphael Warnock, 49-48%, in the B campaign.

A total of 46,043 Georgians who voted in the presidential race did not choose a candidate in the Perdue-Ossoff Senate contest, for a drop-off rate of just under one percentage point. In the special election, however, with 20 candidates on the ballot, 83,409 individuals did not participate in that contest even though they either returned a ballot in the mail or voted in person. The drop-off rate for the special Senate election, therefore, was 1.7%.

A total of 13 US House contests remain uncalled, including six in New York, three in California, and another in New Jersey that was previously called.

The IA-2 race has been called for state Sen. Mariannette Miller-Meeks* (R), but a full recount of her 47-vote victory will begin next week (see below).

The LA-5 race will go to a December 5th runoff election, but it is still unclear if state Rep. Lance Harris (R-Alexandria) or Democrat Candy Christophe will advance face first-place finisher Luke Letlow* (R) in the secondary election.

The NJ-7 contest has been uncalled. State Senate Minority Leader Tom Kean, Jr. (R) is now within 6,275 votes of Rep. Tom Malinowski (D-Rocky Hill) with possibly 60,000 votes remaining to count. Since the votes are being counted sequentially upon receipt, the late swing is definitely toward Republicans since the Democratic votes were predominantly mailed.

As more Alaska votes are counted, projections are being made. Both CNN and Fox News have declared at-large Rep. Don Young* (R-Ft. Yukon) as the victor over challenger Alyse Galvin (I/D). With 84% of the votes recorded, Rep. Young exceeds 55% of the vote.

Mr. Young is the Dean of the House, originally elected in a 1973 special election, and now has won a 25th term. He is the 8th longest serving House member of all-time. Completing his 25th term will move him to 6th place. The longest-serving member in US history is the late Rep. John Dingell (D-MI), with just over 59 years of service.

After trailing for most of the counting period, freshman Illinois Rep. Lauren Underwood (D-Naperville) has won re-election. Yesterday, it was announced that her victory margin over state Sen. Jim Oberweis (R) is unofficially 4,288 votes.

The closest election in the nation comes in the open southern district of Iowa. There, state Sen. Mariannette Miller-Meeks* (R-Ottumwa) has defeated former state Senator and 2018 Lt. Governor nominee Rita Hart (D) by a scant 47 votes. Ms. Hart is filing for a recount in each of the district’s 24 counties, a process that will likely begin next week.

Two counties reported previous problems, but both have been resolved and double checked for accuracy. Their adjusted totals are reflected in the published final result. A total of 393,383 individuals voted in the election according to the Iowa Secretary of State’s office, which is undoubtedly an all-time high. In the last presidential election year of 2016, the congressional vote total was 370,032. Incumbent Rep. David Loebsack (D-Iowa City) is retiring after serving seven terms.

NY-3: The seemingly most ignored outstanding race with an incumbent trailing comes in Long Island’s 3rd Congressional District. There, business development executive George Santos (R), in a race that attracted no outside attention during the campaign, leads two-term Rep. Tom Suozzi (D-Glen Cove) by 4,171 votes. Estimates suggest that as many as 76,000 mail ballots are being counted and recorded. If Mr. Suozzi is to reverse the trend, he would have to exceed 53% of the outstanding votes. Of those counted and posted, the Congressman has received 49% of the vote.

NY-11: While counting of a substantial number of absentee ballots continues, Rep. Max Rose (D-Staten Island) has conceded defeat to state Assemblywoman Nicole Milliotakis*(R). Her 37,000-vote lead will be enough to withstand Rep. Rose gaining among the absentee ballots, thus the concession announcement. The Staten Island seat has traditionally been the only one of New York City’s 13 CDs that votes Republican. Mr. Rose won the seat in 2018 defeating then-Rep. Dan Donovan (R), but it returns to its more traditional voting pattern in this election.

UT-4: The latest update coming from another close race in UT-4 now includes all votes except provisional ballots in Salt Lake County. Approximately 12,000 remain, but not all of those come from the 4th District. The CD encompasses about 57% of the county’s population.

Challenger Burgess Owens (R) still leads Rep. Ben McAdams (D-Salt Lake City) now by 1,616 votes and it’s estimated that another 8-10,000 votes remain. Not all of the provisional ballots will be accepted. State Elections Office officials estimate that the county will complete the counting process sometime on Saturday and then the official vote canvass of the entire district will begin.

Eleven states held gubernatorial elections last week, and in ten of them the same party retained control of the Governor’s mansion. The lone exception was in Montana, where at-large US Rep. Greg Gianforte (R-Bozeman) scored a 54-42% win over Lt. Gov. Mike Cooney (D). The incumbent Governor, Steve Bullock (D), was ineligible to seek a third term. He ran for the Senate but lost to incumbent Steve Daines* (R).

Missouri Governor Mike Parson (R), who ascended to the Governorship when the elected incumbent, Eric Greitens (R), resigned from office, won a full four-year term in his own right. He defeated State Auditor Nicole Galloway (D), 57-41%.

All nine incumbents seeking re-election were successful, with an average winning percentage of 61.2%. The Governor winning with the highest percentage was North Dakota’s Doug Burgum (R), recording a 69.2% victory.

Arizona: Looking at the states that went into political overtime, it is worth examining their current turnout percentages and relating them to their 2016 participation rate.

We see a consistent pattern of the battleground states well exceeding the national turnout growth percentage. The unofficial 2020 Arizona presidential turnout was 3,283,820, at this point, exceeding the 2016 participation figure of 2,573,165 by approximately 710,000 individuals. This means a turnout increase of 21.7%, almost three times higher than the national 7.8% increase. This number well exceeds the population growth of 5% during the last four years.

Georgia: The Peach State of Georgia proved pivotal in the 2020 election, so it is worth looking at some turnout stats from this politically transforming place. The turnout increased 17.4% when compared to the 2016 presidential race. Nationally, the increase as mentioned above was approximately 7.8%. During the same four-year period, the state population expanded by approximately 4%, showing that voter participation outpaced population growth and more than doubled the national voting percentage increase.

Michigan: In 2016, 4,799,284 voted in the presidential race. The current figure suggests that 5,519,348 participated last Tuesday. This means turnout increased 13.1% in the Wolverine State, again far higher than the 7.8% national average. Unlike Arizona and Georgia, where population figures are expanding by one percentage point each year, Michigan’s total population growth has only been around 1% for the entire decade.

Nevada: The Silver State of Nevada is growing at a rate that is even higher than Arizona and Georgia, approximately 1.3% per year. Therefore, the uptick in the presidential turnout of 15.0% is also higher than the population increase for the four-year period. In 2016, a total of 1,125,385 cast a ballot in the presidential race. On Tuesday, 1,323,719 unofficially participated in the 2020 presidential election.

Pennsylvania: The Keystone State of Pennsylvania is another place whose population is not rapidly growing, and they will again expect to lose a congressional seat when apportionment figures are released at the end of this year. In 2016, a total of 6,115,402 voted in the presidential race. On Tuesday, that figure climbed to an uncertified figure of 6,749,672, for an increase factor of 9.4%, again exceeding the national average of 7.8 percent. The population growth rate in the state for the entire decade is less than one percentage point, suggesting a very strong real voting increase when comparing the two presidential elections.

Wisconsin: An unofficial total of 3,293,428 Badger State voters went to the polls on Tuesday, in comparison to 2,976,150 who voted in 2016. This means their turnout percentage increased 9.6% in 2020, again higher than the 7.8% national average. The Wisconsin population is only growing at an average quarter percent rate per year.