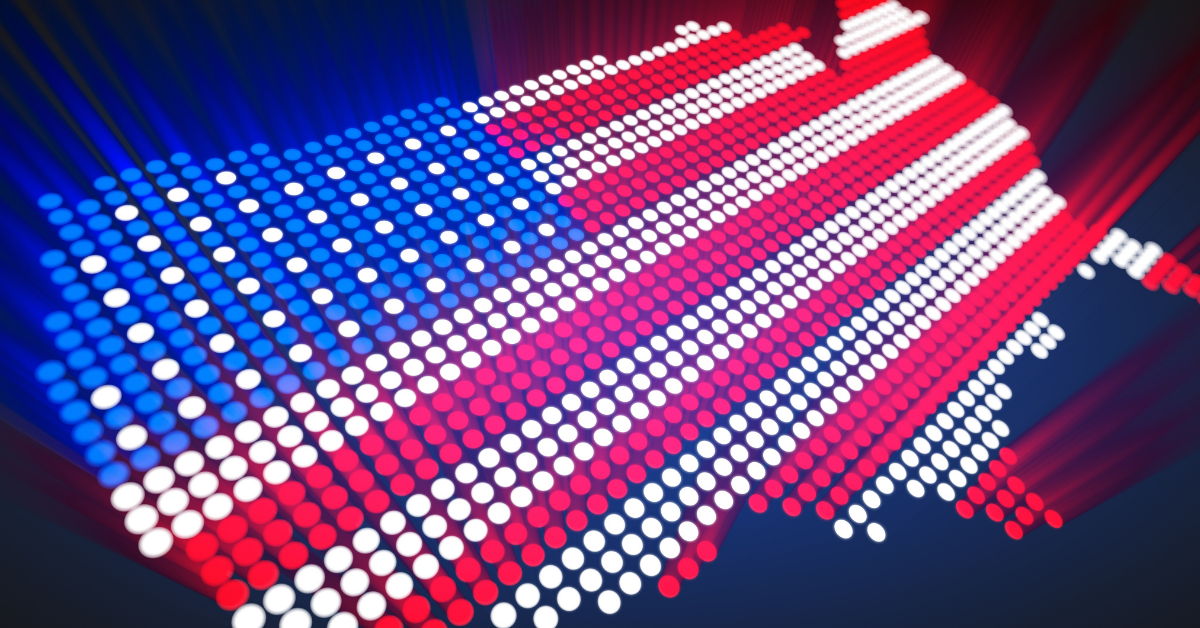 Hoosier State Democratic US Senate nominee Tom McDermott’s campaign released the results of their recently conducted Change Research poll (8/20-24; 2,111 IN likely general election voters; online) that found Sen. Todd Young* (R) holding only a 45-42% lead. The Indiana Senate race had been considered non-competitive. The Young campaign spokesman responded with criticism over the online methodology and weighting system that Change Research employs. Expect the Republicans to quickly counter this data with a poll release of their own.

Remington Research, after Independent John Wood withdrew from the race, then went into the field. Their survey (8/24-25; 1,011 MO likely general election voters; interactive voice response system) found Mr. Schmitt’s lead at a similar 51-40%. This race, another must win for the national GOP, should be rated as Likely Republican.

The Fabrizio Ward (R) and Impact Research (D) firms again collaborated on a statewide survey for AARP, as they have done in several places this year. Their latest joint effort is in the key swing state of Nevada. The poll was conducted over the August 16-24 period of 500 NV registered voters, with oversamples of 550 senior voters aged 50 and older, and another oversample of 290 Hispanic voters. The ballot test finds Sen. Catherine Cortez Masto (D) again barely leading former Attorney General Adam Laxalt (R), 44-40%. When the two candidates were isolated on an individual ballot test, Cortez Masto’s edge dropped to a virtually even 48-47%.

In mid-August, when St. Anselm College released a survey showing retired Army General and 2020 US Senate Republican candidate Don Bolduc developing a substantial lead for the September 13th GOP Senate primary, Gov. Chris Sununu (R) went public in an attempt to negate his advantage. Many believe, including Gov. Sununu, that Gen. Bolduc would lose to Sen. Maggie Hassan (D) in November. Previously, Gen. Bolduc had accused Gov. Sununu of being “a Chinese communist sympathizer,” among other comments that created bad blood between the two men.

This week, the University of New Hampshire (8/25-29; 892 NH likely Republican primary voters; online) reported the results of their new statewide survey. According to the UNH Granite State Poll, Gen. Bolduc continues to lead state Senate President Chuck Morse* (R-Salem) by over 20 points, 43-22%, with three other candidates languishing in low single digits. With Morse having a significant advantage over Bolduc in financial resources, expect the final two weeks of this Republican primary campaign to feature heavy political fireworks.

At the end of the final counting, 60% of voters chose a Republican candidate, but the RCV system yielded a Democratic victor. Therefore, in a system that is designed to create a majority candidate, in this case it produced a minority vote share winner.

The finalists were Ms. Peltola, who recorded 40.2% of the vote. Ms. Palin secured 31.3%, and Nick Begich, III (R), the grandson of former Democratic US Rep. Nick Begich, and the nephew of former US Senator and ex-Anchorage Mayor Mark Begich (D), captured 28.5%. Finishing third, Mr. Begich was eliminated from further competition, and his first-place votes were located and then distributed to the other candidates via the voters’ ranking. In the end, Ms. Peltola defeated Ms. Palin by 5,219 votes, though another 14,965 ballots were disqualified in the Ranked Choice Voting process.

Ms. Peltola will be sworn into the House and serve for the remainder of this year. The general election will feature a rerun race as all three of the major contenders, Rep-Elect Peltola, Ms. Palin, and Mr. Begich all qualified for the general election. Again, the Ranked Choice Voting System will be used to determine the winner if no one, predictably, reaches the 50% mark.

The poll finds Rep. Schweikert, who before the 2020 election did not contest 11 ethics violation fines for misuse of his congressional office and campaign finance related issues, posting a poor 26:46% personal favorability rating. The additional fact that the Congressman received only 43.3% in this year’s Republican primary against two opponents, and may well have been defeated if only one individual had challenged him, suggests that this should be a race of concern for the Republican leadership.

Congressman Charlie Crist (D-St. Petersburg) late this week resigned his Pinellas County anchored US House seat in order to fully concentrate on his gubernatorial campaign. Mr. Crist won the statewide Democratic primary on August 23rd and will face Gov. Ron DeSantis (R) in the general election. Another member of the Florida congressional delegation, Rep. Ted Deutch (D-Boca Raton), who announced in February that he would leave Congress to become the CEO of the American Jewish Committee, will reportedly officially resign on October 1st.

With the Crist and Deutch resignations, the Democrats will be down to 220 seats in the House even after adding New York Rep-Elect Pat Ryan (D-Poughkeepsie) after his special election victory certification and the Alaska at-large seat where Democrat Mary Peltola was declared the special election winner. It is unclear if Gov. DeSantis will call a special election to fill the Florida vacancies or just leave them vacant until the new term begins in January.

The Trafalgar Group’s Arizona poll (see Senate race above) also tested the open Governor’s race. Two polls conducted after the state’s August 2nd primary gave Democrat Katie Hobbs, the AZ Secretary of State, leads over former news anchor Kari Lake (R) within the polling margin of error range. On the other hand, Trafalgar posts Ms. Lake to her first lead of the general election, 47-46%. All of the data suggest that this race is in the toss-up realm.

The aforementioned Emerson College survey (see Georgia Senate above) also tested the Peach State Governor’s race between incumbent Brian Kemp (R) and challenger Stacey Abrams (D), who returns for a re-match from their close 2018 contest. The Emerson results give Gov. Kemp a 48-44% edge, which appears as a consistent margin routinely found in eleven of twelve July-August polls in which the incumbent held an edge. The lone outlier poll, a Research Affiliates study that concluded on August 1st, found the two candidates tied at 47% apiece.

Northeastern Kansas state Sen. Dennis Pyle (I-Hiawatha) has qualified for the ballot as an independent gubernatorial candidate. Mr. Pyle, who was elected as a Republican but became an Independent in further evidence of the deep divide between Kansas conservative and centrist Republicans, is getting support from an improbable source.

Some in the Democratic Party were active in helping further the petition signature process that allowed him to qualify for the general election. Sen. Pyle attacks GOP nominee Derek Schmidt, the state’s Attorney General, as being insufficiently conservative, while the Democrats want Pyle to take conservative votes away from the GOP nominee to help incumbent Gov. Laura Kelly (D).

Four years ago, Gov. Kelly won her office with plurality support (48%), and her likely path to re-election will again be with less than a majority. The latest released survey, from Battleground Connect (8/8-10; 1,074 KS likely general election voters; text) found Mr. Schmidt leading Gov. Kelly, 48-45%, with Mr. Pyle attracting only 2% support. This poll was conducted, however, prior to the latter man qualifying as an official November contender.

Around the country, we have been seeing a number of places report conflicting polling data. Such is the case in the Michigan Governor’s race. Though both EPIC-MRA, polling for the Michigan Information & Research Service, and the Trafalgar Group find Gov. Gretchen Whitmer (D) leading GOP nominee Tudor Dixon, the margins are quite different.

The New Mexico based Research & Polling, Inc. company has released new data for the competitive Land of Enchantment Governor’s race, the first time since mid-June that we’ve seen new numbers for this campaign.

The ballot test spread is beyond this survey’s polling margin of error of 4.3 percentage points, the latter factor high largely due to the low size of the statewide polling sample. The previous published survey, GQR Research’s June 11-17 study also featuring a low sampling universe of 500 likely voters, posted the Governor to a 48-44% edge.

Gov. Henry McMaster (R) succeeded then-Gov. Nikki Haley (R) when she resigned her office in 2017 to become US Ambassador to the United Nations. Mr. McMaster would then win a full term in 2018, and now seeks re-election. Because of the state’s former one and now two-term limit, winning re-election this year and serving most of the next term would make Mr. McMaster the longest-serving Governor in state history.

The Trafalgar Group, as part of their nationwide polling series (8/25-28; 1,071 SC likely general election voters; multiple sampling techniques) tested the Palmetto State electorate and sees Gov. McMaster jumping out to a 51-43% lead over former Congressman Joe Cunningham, who won the Democratic nomination back in the June primary. Four years ago, Gov. McMaster was re-elected with a 54-46% margin.

The next day’s polling release featured a survey from the Democratic firm, Blueprint Polling (8/24-25; 721 SC likely general election voters; live interview), that actually posted McMaster to a larger lead than the Trafalgar result, 50-39%.